A woman from Bangladesh’s minority Hindu community has described the plight of the country’s minority people to US President Donald Trump and sought help so that they can stay in homeland.

The woman, who identified herself as Saha, told Trump that as many as 37 million people including the members of the minority communities have been “disappeared”.

Speaking of her personal experience, Saha said that Muslim fundamentalist group burned her home and taken her land. 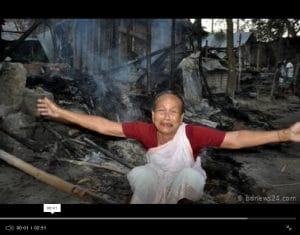 Muslim fundamentalist group burned her home and took her land, Saha told Trump before claiming that the perpetrators enjoy political shelter in Bangladesh.
On Jul 17, Trump exchanged views with a group of survivors of religious persecution in the Oval Office.

Read the following conversation (starts at 11:24) between US President and Saha:

Ms Saha: Sir, thank you. Sir, I am from Bangladesh

Ms Saha: Sir, thank you. Sir, I am from Bangladesh. And here is 37 million, the Hindu, Buddhist, and Christianity, disappear. Please help us, the Bangladesh people. We want to stay in our country.

Ms Saha: Yeah. Still, there is 18 million minority people. My request is: Please help us. We don’t want to leave our country. Just help, Mr. President.
I have lost my home. They burned my home. They’ve taken my land. But no adjustment has taken place.

Ms Saha: The Muslim fundamentalist group. And they are — always they are getting the political shelter. Always.