Footage of a man assaulting a young woman has been viewed thousands of times in multiple posts on Facebook and Twitter alongside a claim it shows a Hindu woman being attacked in the Indian state of Kerala, where Hindus are a minority. The claim is false; this video has circulated online since 2017 in reports about a Hindu man assaulting his girlfriend in the state of Andhra Pradesh. Census data also shows that Hindus are not a minority in Kerala.

The video was published here on Facebook on September 7, 2020.

The post’s Hindi caption translates to English as: “This video shows assault on women in Kerala. This is not the first video that is going viral. Such incidents take place every day there, and the main reason behind this is that Hindus are in the minority there.”

However, the claim is false.

Social media users, for example on Twitter here, noted that the individuals in the video are speaking Telugu – a regional language in the states of Andhra Pradesh and Telangana. In Kerala, the state claimed in the false posts, people generally speak Malayalam.

An AFP journalist also confirmed that the individuals are speaking Telugu, and that the man can be heard accusing the young woman of infidelity. Two names can also be heard: Sai and Karthik.

A subsequent keyword search found that the same footage was also published here on YouTube by TV9 Telugu, a regional news network, on September 26, 2017.

Kanigiri is a town in Andhra Pradesh’s Prakasam district.

Below is a screenshot comparison of the video shared in the misleading Facebook posts (L) and the YouTube video (R): 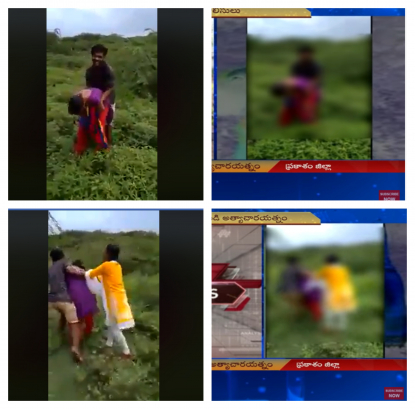 English-language local news channel NDTV also published a report about the incident here on September 27, 2017. The article includes a screenshot of the video.

The report is headlined: “Andhra Teen Assaulted By Boyfriend Who Shares Video”.

NDTV’s report also matches the two names — Sai and Karthik — that can be heard in the footage.

“The police say the girl and her friend had gone to a temple to meet the accused man, B Sai, whom she had reportedly known for over a year. Among those arrested is Karthik, who was close friends with the student earlier but was reportedly upset about her new relationship. It was he who instigated Sai to assault the student and film the act,” NDTV reported.

Moreover, Hindu residents of Kerala are not a religious minority, according to Indian census data.

According to the 2011 Census, Hinduism is the “majority religion” in the state, making up 54.73% of the population.