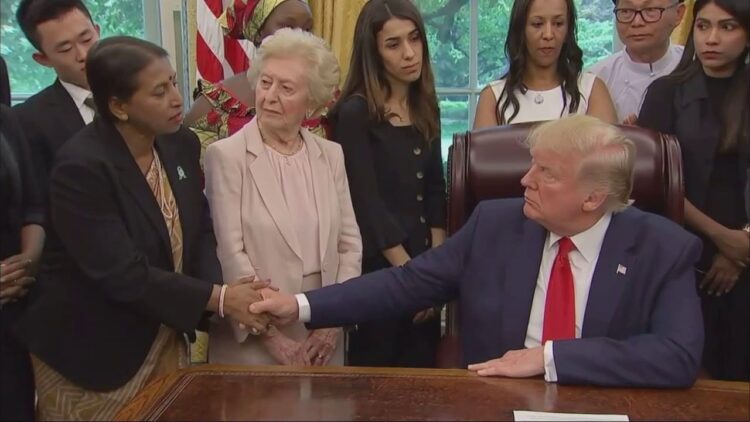 Arun Devnath: A Bangladeshi minority rights activist found a rare opportunity to meet President Donald Trump at the White House, but those moments of fame turned into colossal outrage back home. At the meeting, Priya Saha, a director of Dhaka-based SHAREE that works with the marginalised and disadvantaged communities, alleged that 37 million people of minority groups have “disappeared” from Bangladesh, without mentioning time references.

In a video, Ms. Saha was seen urging President Trump at a meeting on July 17 to help Hindus, Buddhists and Christians in Bangladesh. She also alleged that her land was grabbed by Muslim fundamentalists. Legions of her critics came down on her on social networks for her “unpatriotic” and “treasonous” comments.

Ms. Saha’s Dhaka home became a site, however briefly, for simmering protests. Lawyers threatened her with legal action, vowing to throw her into jail. Apparently embarrassed by her comments, Hindu leaders shunned her in a swift change of mind. A minority lobbying group, the Hindu Buddhist Christian Unity Council, expelled her as an organising secretary for “breach of discipline”.

The first official reaction came from the Foreign Ministry on July 20. “It appears that there was an ulterior motive behind Ms. Saha’s absolutely false and concocted stories that were targeted to malign Bangladesh,” the Ministry said. “Bangladesh is a beacon of religious freedom and communal harmony, where people of all faiths have been living in peace for ages.”

Next came two influential Ministers. Home Minister Asaduzzaman Khan insisted that Ms. Saha must prove the allegations or face stern action. Road Transport Minister Obaidul Quader signalled that Ms. Saha would be sued for sedition. Prime Minister Sheikh Hasina’s son and ICT affairs adviser Sajeeb Wazed hit out at the U.S. Embassy in Dhaka for choosing her as part of a delegation to Washington. But government functionaries dialled down their rhetoric after Ms. Hasina stepped in and disapproved of any hasty action against Ms. Saha.

In the immediate aftermath, Ms. Saha was conspicuously silent. Then on July 22, her rights organisation posted a video in which she defended herself with some data, basing her assertion on a study by Abul Barkat, an economist and a professor at Dhaka University. She said she was familiar with the findings as she had worked with Prof. Barkat.

The Hindus now account for 9.7% of the total population, compared to 29.7% during the 1947 Partition, Ms. Saha said in the new video. That means many people have gradually left Bangladesh, she said.

“All I meant is that the number of minority people has gradually declined. I didn’t mean to comment on the government. I just mentioned what happened in my village,” she said referring to Pirojpur, a district in southern Bangladesh. “There were 40 families in my village in 2004. That number is now 13.”

Taqbir Huda, a research specialist at Bangladesh Legal Aid and Services Trust, said: “It is absurd to report about minority oppression to the very man who has come to epitomise racism and anti-minority bigotry in his own country. Furthermore, some may argue that asking to be ‘saved’ in this context only works to feed into the ‘white saviour complex’, which has historically proven to be hazardous for the subcontinent.”

After Ms. Saha came up with self-defence, Prof. Barkat said she had never worked with him, and accused her of making “misleading and unprincipled” comments. For his part, Prof. Barkat said some 10.13 million Hindus went missing over five decades — from 1964 to 2013 — and Ms. Saha did not mention the 50-year period.

“While Hindus are in fact leaving Bangladesh in huge numbers, portraying it as ‘disappearance’ might be disingenuous since that is quite different from migration, even if caused by persecution,” said Mr. Huda. There is an astonishing difference between Ms. Saha’s claim and the calculation by Mr. Barkat, but both crystallise one pattern — the gradual, quiet departure of Hindus from Bangladesh. The unsavoury subject that Bangladeshis often prefer to sweep under the carpet has now opened emotionally-charged debates.

Arun Devnath is a journalist based in Dhaka.