India’s Government Is Not Anti-Muslim 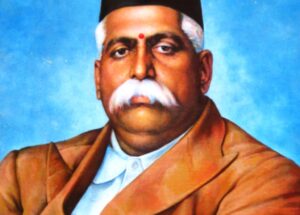 Keshav Baliram Hedgewar, founder of the RSS, image via Samvada.org

EXECUTIVE SUMMARY: A general impression has spread across the international media that the Rashtriya Swayamsevak Sangh, with which India’s current ruling Bharatiya Janata Party is affiliated, is opposed to minorities, Muslims in particular. This is absolutely false.

Reliable studies indicate that the Rashtriya Swayamsevak Sangh (RSS) has, since its inception, been in favor of social integration, not the isolation of minorities from the national mainstream. The organization’s founder, Keshav Baliram Hedgewar, was influenced by Saint Ramdas, Saint Tukaram, Maharana Pratap, Chhatrapati Shivaji, and Lokmanya Tilak, none of whom was anti-Muslim. Pratap and Shivaji had Muslims as their top military commanders, and Tilak’s friendship with Indian nationalist leader MA Jinnah is well known.

The political philosophy espoused by Hedgewar is centered around the ideas of Hindu Rashtra (the Hindu nation) and Ekatmata (unity of soul). It is not in any way linked to any conservative Hindu ritualistic religion but rather to India’s national identity. Hedgewar was a “self-professed atheist.” His definition of Hinduism encompassed all communities, faiths, and creeds.

The concept of Hindu life has had a vast spiritual-religious canvas. The central message of legendary Hindu saint Swami Vivekananda is that all religions lead to the same goal. He declared that Indian tradition believes “not only in toleration” but also in the acceptance of “all religions as true.”

Hedgewar was close to several Muslim leaders. He was imprisoned in August 1921 for his participation in the Congress’s Non-Cooperation Movement. On his release from British prison in July 1922, top Congress leaders, including Dr. S. A. Ansari, Motilal Nehru, Vallabhbhai Patel, and C. Rajagopalachari, organized a function in Nagpur.

In harmony with the essentials of Hedgewar’s political philosophy, the Sangh has always held the view that India/Bharat belongs to all who are born there and continue to live there, irrespective of religion or school of thought. Sensitive as it was to the ancestral roots common to Hindus and almost all minorities in India, the Sangh opposed the country’s partition in 1947. Since India’s independence, the Sangh’s goal has been to foster a comprehensive development of the Hindu Rashtra, a nation for all who have been living in the region since time immemorial whatever their faith or creed.

After India’s partition, Hedgewar’s successor, MS Golwalkar, called upon swaymsevaks (members of the RSS) to work for all people across the country. By the term “Hindu,” Golwalkar meant “the inhabitants of the sacred land (Prithvi Mata) extending from Iran in the west to the Malay peninsula in the east, from Tibet in the north to Sri Lanka in the south.”

Deen Dayal Upadhyaya, one of the most prominent RSS thinkers, propounded the philosophy of “Integrated Humanism” (Ekatma Manavavad). He declared long ago that Hindus were known for their values of humanity and coexistence and Muslims had no need to fear. In a lecture at Vigyan Bhawan in September 2018, current RSS chief Mohan Bhagwat said, “Hindu Rashtra does not mean there is no place for Muslims…. The day it is said that Muslims are unwanted in India, the concept of Hindutva [“Hinduness”] will cease to exist.”

The RSS has consistently stressed the need to instill national pride in all Indians and foster a sense of national unity. This has driven the RSS to oppose the Islamic radicalism, terrorism, and separatism found in some Muslim-dominated areas such as the Kashmir Valley. The RSS does not want a new demand for a separate nation to result from growth in the country’s Muslim population.

Knowledgeable sources claim that the RSS-affiliated BJP (the Bharatiya Jansangh in its earlier incarnation) has always considered the interests of the country’s minorities. Its first manifesto (October 29, 1951) focused on the goal of national integration. The manifesto, on which the BJP ran in the 2019 election, declared its commitment to the empowerment and “development with dignity of all minorities.”

The BJP, when in power at both the federal and state levels, has done better than other party governments at curbing riots and protecting Muslim lives. The current government led by PM Narendra Modi has taken several measures to promote the interests of minorities. Like its predecessors, the Modi government has given minority communities freedom to manage their religious and educational institutions and has extended them generous financial aid. The Modi government launched a campaign to provide basic amenities to ensure educational empowerment of minorities, particularly girls.

The Modi government acted to protect Muslim women in India by making the practice of “triple talaq” (a form of Islamic divorce in which the husband instantly and irrevocably divorces his wife) a criminal offense. It also passed the Citizenship Amendment Act in 2019 to grant Indian citizenship to the minority Hindu, Christian, Buddhist, Sikh, and Zoroastrian communities, which have been facing religious persecution in the country’s neighboring region.

Jagdish N. Singh is an Indian journalist based in New Delhi.