Three photos have been shared hundreds of times in multiple posts on Facebook and Twitter alongside a claim they show a Hindu woman who was assaulted by her extended family for marrying a Muslim man in the south Indian state of Kerala. This claim is misleading; two of the photos circulated in June 2020 in reports about a domestic violence case involving a Muslim woman from Bangladesh.

The photos were published here on Facebook on July 29, 2020.

The first photo shows a smiling woman and man standing together; the second and third show a woman with a bruised back and a black eye.

Part of the post’s Hindi caption translates to English as: “One more girl became a victim of love jihad. A TV channel in Kerala has started a series about the girls who are married after falling to love jihad in Malayalam. Every girl says in the beginning, my Abdul is not like other Muslims, it is very noble, but when the eyes are open, there are three consequences in front of the girls, either buried in a suitcase or sold in the brothel, or a baby machine.”

“Love Jihad” is a term coined by hardline Hindu groups in India to describe a conspiracy that Muslim men seduce and marry Hindu women to covert them to Islam. The groups also claim that the women are abused and killed if they do not accept Islam, as AFP reported here.

Malayalam is the regional language of the south Indian state of Kerala.

The claim, however, is misleading; two of the three photos in the misleading posts circulated in reports about a Muslim domestic violence victim in Bangladesh.

A reverse image search on Google found the first photo published here on June 26, 2020 in a report by the Dhaka Tribune, a newspaper in Bangladesh. 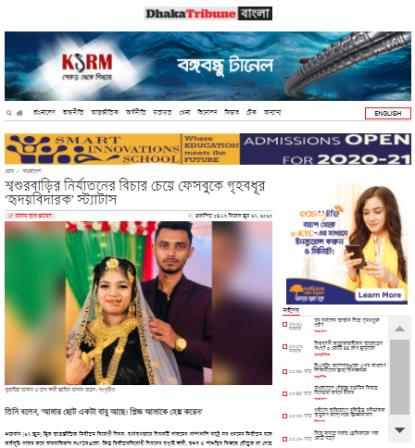 The article’s Bengali headline reads: “Heart-wrenching status update by a housewife, describing the atrocities she faced from her in-laws”.

It reads, in part: “A housewife in Dhaka posted a ‘heartbreaking’ status on social media Facebook alleging that her husband, father-in-law and mother-in-law were abusing her for not receiving dowry.

“The wife, Sumaiya Hasan, alleged in her Facebook account: I have six pictures showing the torture. I also sued, but they persuaded me (reconciled) and abused me again. He wants money from me. My mother-in-law told my husband that he would give you money only if he killed me. They beat me in front of them.”

Below is a screenshot comparison of the first photo in the misleading Facebook post (L) and the Dhaka Tribune photo (R): 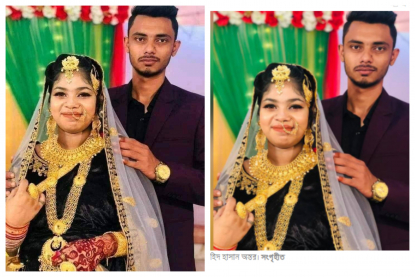 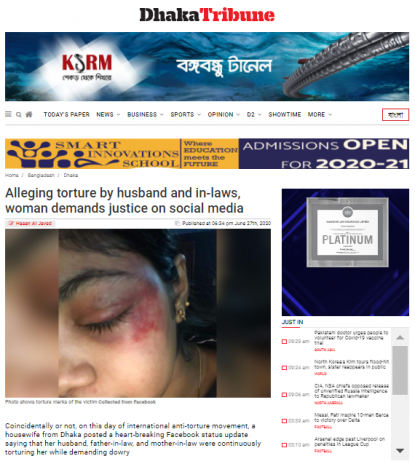 It is headlined: “Alleging torture by husband and in-laws, woman demands justice on social media”.

The article reads: “A housewife from Dhaka posted a heart-breaking Facebook status update, saying that her husband, father-in-law and mother-in-law were continuously torturing her to demand dowry from her family. Sumaiya Hassan, the housewife, shared her story at 3:10pm on Friday along with six photos showing several wounds on her body.”

Below is a screenshot comparison of the second photo in the misleading post (L) and the Dhaka Tribune photo (R):

The post, written in a mix of Bengali and English, reads: “The police asked me to file a complaint after seeing my [Facebook] post, but my mother and I have decided not to do so as I have an eight-month old baby and I want to raise the child with my husband. We have resolved the issue and my husband has promised not to raise his hands on me.”