The drama ‘Bijoya’, made for the occasion of Durga Puja, a major Hindu festival celebrated in Autumn, has been attacked by some radical Hindu activists in Bangladesh and India. These fanatic radical-Hindu activists are not only threatening the play’s artist, director, producer and storyteller with ‘immolation’ threats, and bomb the office of its production company, Crown Entertainment, they have been making extremely derogatory remarks about the Prophet of Islam. They have even described the entire Muslim community as ‘born from adultery’, ‘swine’, etc., and have threatened to gang-rape Muslim women.

More than four hundred thousand members of a group called Sonaton HINDU on Facebook, along with members of various other radical Hindu groups are carrying out these misdeeds in a planned manner. Despite the existence of cybercrime laws in Bangladesh, reckless extremist Hindus have resorted to making offensive remarks about Islam, Muslims and the Prophet of Islam.

Meanwhile, the author of this story and internationally acclaimed award-winning anti-militancy journalist Salah Uddin Shoaib Choudhury’s Facebook posts and inbox are made targets of these heinous comments and countless threats.

Regarding the plot of this drama, the writer of the story Shoaib Choudhury has said, “These radical Hindus claim that in the play ‘Bijoya’ made for the occasion of Durga Puja, has a scene of conversion of a Hindu woman to Islam, which is completely fabricated and baseless. Based on such baseless propaganda, the miscreants continue to make heinous remarks about Islam and the Prophet Muhammad.”

“Neither I nor the production company and the producer have said anything about the story of this play,” he added. “Even the teaser of the drama was not released. So where did the complainants get this fabricated information? I think some people are jealous of the success of Crown Entertainment, the country’s top production company, and are deliberately spreading rumors and trying to make this drama controversial. I urge everyone to be vigilant against these vicious circles.” 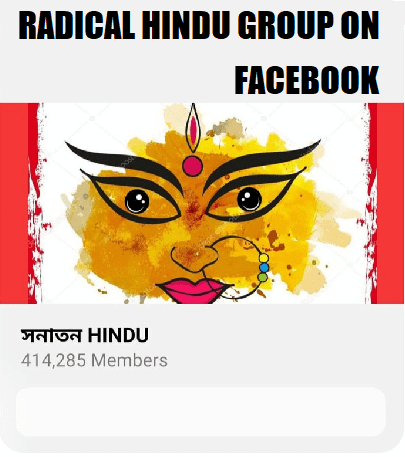 Tajul Islam, Deputy CEO of Crown Entertainment, the production house of the play, said “the kind of rudeness that some people are committing based on fictitious allegations has never happened before. I humbly ask everyone to not pay heed to these false rumors that are being circulated no reason and wait until the drama is aired. For those who are making heinous comments about Islam, Muslims, and our Prophet, I ask them, to refrain from such crimes. Do not assault the communal harmony of the country.”

What do the extremist Hindus want?

Some radical Hindus in Bangladesh and India are constantly making provocative statements through social media, most of whom are semi-illiterate. Some of them are making very offensive remarks about Bangladesh as well as trying to harm the sovereignty of this country.

Some of the extremist Hindus are demanding that no drama ever be made on Durga Puja in Bangladesh and that Hindu artists should never be made to play Muslim characters. Some of them falsely claim that there is no security for Hindus in Bangladesh.