Christians of all Churches who together form a religious minority in Sri Lanka celebrate their customary Easter festival in a nation that is sadly beset with a bewildering complexity of challenges and deeply disturbing issues. One is automatically driven to the chilling event of the Easter massacre and terrorist bombings of April 2019 that is still haunting the memory of all who were affected with their loved ones either killed in cold blood, mortally wounded, and either maimed or incapacitated for life by that horrible and dastardly act of carnage which since the thirty-year battle against terrorism could be regarded as another unparalleled national tragedy, a catastrophe of no mean magnitude scarring our nation’s current history.

The projects that were contemplated for ensuring of national security and safety for all citizens as well as grand plans for economic recovery and social integration were equally shattered on that fateful morning when the Easter festival that normally would celebrate life, re-birth in spirit and human liberation turned out in reality into a Good Friday of pain, anguish, death and destruction.

Ethnic harmony and religious co-existence that were to be the building blocks of national reconciliation, the motherland’s dire need of the hour, came under severe threat, trial and challenge.

The aftermath of the Easter massacre

A land so nobly and traditionally committed to mettā, karunā, ahimsā, compassion and loving kindness, tolerance and peaceful co-existence for centuries suddenly succumbed to an alarming tragedy that was incredible and bewildering. The victims were at the heart of one of their most important religious festivals when the heartless suicide bombers struck wild and merciless, carrying out their killing spree that snuffed the lives of hundreds of devotees who were in prayer in their own holy sanctuaries.

Some of them were wiped out by entire families with babies and infants among them. The mayhem was beyond imagination. It was a bloody mess and horrible chaos with pools of blood draining, dismembered body parts scattered, the cry and the moaning of the wounded and bleeding innocents filling the air.

Who would have least expected such a tragedy to befall on such an auspicious and holy day of religious observance? It was Easter Sunday, the greatest world-wide festival of the Christians who were celebrating the joy and glory of the Lord Jesus Christ risen from the dead. They had barely finished singing their Easter song of the Halleluia,

The light and power of Easter 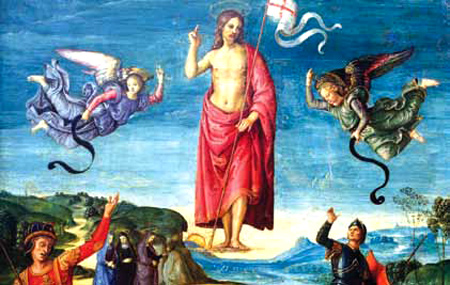 Despite long investigations done by the Presidential Commission of Inquiry into the Easter Massacre, there is clear dissatisfaction and suspicion about the documents issued as to whether it has probed into the naked truth of the incident revealing the master-minds that planned, financed and executed it as well as those who fostered this particular extremist radical group in the country.

The responsibility of not having acted swiftly enough to prevent the tragedy on the part of the government authorities despite prior and clear warnings from intelligence services looms as a serious issue to contend with. Religious leaders continue to express dissatisfaction about the work of the Commission while there is still fear, anxiety and a sense of hopelessness in all who were affected. The cry for truth and justice on behalf of the victims is echoing ever loud day by day.

Easter marks the final phase of the earthly life of Jesus of Nazareth who vanquished the powers of evil and injustice by rising from the grave to be alive among his disciples to empower them to proclaim the power of his name.

That message is one of peace to all people of goodwill, a call to pass over from evil ways to virtuous living through repentance and change of heart, to love without limits and to honor every human being while defending the preciousness of life against its manifold threats. Within the death and life in battle array, the Christ of Easter is a paradigm and a symbol of life and cross-cultural energy that can inspire in mankind a new culture of life and a civilisation of love.

He became the first ever to pass over from death to rebirth in a risen new life. It busted and shattered the culture of death in all its forms. The light of Easter eclipses the darkness of evil, sin, injustice and death-dealing processes.

It registered the definitive defeat of death accomplished by the one who also brought healing to the sick, drove out the demons, dispelled fear and infused courage to stand for the truth. It is a severe uncompromising judgement and condemnation of all political ideologies, socio-economic systems and policies that encourage discrimination, the oppression of the poor, the accumulation of wealth, military confrontation as well as production, sale, deployment and use of weapons, be they conventional, chemical or nuclear that threaten human life on a global scale.

Jesus of Nazareth invited all in his country, the Galileans in the North, the Judeans in the South and the Samaritans in the middle of his native land, not to stay divided based on their differences of race, language or ethnicity. To divinise them would be tantamount to idol worship that is a travesty of true religion.

Violence that destroys life and property causing untold suffering to so many has no place in religion. There is no way of conquering others through unleashing religious wars.

The disciples of Christ are reported to have travelled far and wide in fidelity to the missionary commission they received from the Risen Lord, preaching the gospel of life, social peace and harmony challenging people of all cultures beginning from Jerusalem through the ancient middle-east that covered Greece as well leading to Rome, the capital of the Empire,

World history bears ample witness that all empires based on extremism, ruthless intolerance and false forms of supremacy are destined to fall and lose the jewels in their crowns.

While politics and political parties based on race, religion and ethnicity are bound to spell disaster, Sri Lanka has still to learn what true independence and nationhood is and strive to avoid all divisive extremism that will bring inevitable rack and ruin to the national fabric of the motherland, While those in government and those entrusted with working for the common good are responsible for the national security, economic progress, preservation of national assets, social cohesion, public health, education and national unity of the country at large, the community of the citizens as a nation of Sri Lankans must take up their commitment and duty to foster co-existence, mutual understanding and respect in a spirit of dialogue and collaboration.

In any society marked with diversity, only the language of dialogue will hold people in solidarity, cohesion and communion with one another. It will surely prove to be an effective deterrent against any form of extremism in the radicalisation of beliefs and ideologies. In a country such as Sri Lanka blessed with being an admirable cradle of four of the world’s living religions, their spiritual potential to unleash the spirit of unity and co-existence has to be exploited and channeled to the fullest extent possible, so that religions instead of failing the people, would turn out to be rivers of fertility and life meandering through our various religious and ethno-social classes, regardless of the fact as to whether they be in the majority or in the minority.

The first step to inter-religious relations is the effort made to understand and appreciate one another’s religious tenets, beliefs and ethics in their pristine purity un-adulterated with extremism and radicalisation.

It is only within such a broad-based national unity crossing all borders, that true patriotism and genuine nationhood as well as the path to progress and the country’s stability could be achieved without these goals languishing as mere illusive dreams.

We must be determined in our national endeavours to neutralise all death-dealing factors that hurt the nation and struggle together to reach out to the refreshing and transforming springs of life.

Disclaimer: This story is auto-generated from news feeds. It has not been edited by Minority Watch staff. Please click this SOURCE LINK that deserves the credit.